Sunday afternoon I was lying in bed (cause it's Sunday, why get out of bed?) and saw on the Facebook that Sony was having a Playstation on Campus event here in St. Louis at the beautiful Washington University campus. I would say I jumped out of bed and called Heath, but that would be a lie. My bed is very cozy. I did however make plans with Heath and a recent transplant to St. Louis/ new friend Madison to go the next afternoon and see what this event was all about.


First of all, Washington University, like most campuses, is full of odd, one-ways and roundabouts, and of course, no parking. Heath and I drove around like on a quest to find that last dungeon in Zelda, or I guess that last whatever it is Jak and Daxter collect. Finally after about a half hour of searching we find the small village of blue tents, tvs, and a van with Kratos' ugly mug on the side. "I think this is it" I said to Heath. "Duh" he replied.
The event it self was more what you would see in a mall during the holidays. Guys and girls in Playstation shirts, Playstation sunglasses, and just the right amount of cool. There were 2 couches set up with big screens playing Bioshock Infinite  and Playstion All-Stars Battle Royale. There was also 2 very large screens set up with MLB The Show 13 showcasing the Move controller. The more interesting little screens littering the perimiter where displaying a multitude of PSN games, including a great demo of the new hit Guacamelee! I played that title a bit and found it very fun and I'm looking forward to some more time with it. I also got my very first taste of Metal Gear Solid: Revengence, which I actually found very cool and super satisfying to play. The effect of zooming in on a robot and slicing and dicing him to bits was awesome, though I was confused why Raiden was wearing a sombrero in the demo I played. There was also a bank of Vita's on the edge of the tents, but the wind and very bright sun made them almost unviewable, so I have no idea what they had on them. 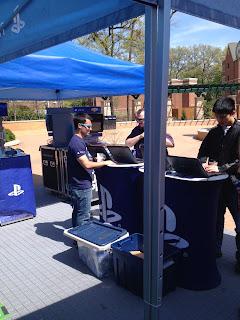 The main point of this post is the Playstation All-Star Battle Royal (name is tooooo long!) tournament we got to participate in. Heath, Madison, and I joined 5 other guys who where hanging out in a head to head tournament, with the top 2 players of each round met up in a final round for All-Star supremacy  I chose Raiden, who I had just spent time with on Revengence (and he has a sword so...), while Heath chose the uber-intimidating Parappa the Rapper. I won my first round, Heath did not.
In the final round, I made the bad choice of switching up my character and choosing Evil Cole (Infamous) because someone else had already chosen Raiden. Along with Good Cole and Kratos an epic battle was waged in South 40 Plaza...Well epic battle would be appropriate if one guy in an Adventure Time t-shirt didn't decide to MOP THE FLOOR WITH ALL OF US! Turns out this guy (who I had taken to simply calling Adventure Time) didn't have class (or at least didn't go) and had spent most of the day preparing for this beatdown. He was Good Cole and he unleashed holy hell on all of us, until finally it was him with 3 stock left and poor little me down to 1. Guess what happened.
Oh yeah, did I mention a God of War PS3 bundle was on the line? DAMN YOU GARY (Adventure Time's  real name) DAMN YOU TO HADES!
Actually it was a lot of fun and certainly did the job of making me more appreciative of some of Sony's offerings and specifically giving All-Stars another shot. It was great to meet some new people (hi Gary!) and of course, get swag.
Speaking of swag, we have a bunch of PS3 keychains and $10 off coupons at the Sony online store. If you want any just comment or email us and we'll hook you up! Be on the lookout for more Playstion on Campus events in your town, and to quote the pillow on the couch where I was handed my crushing defeat: "Keep Calm and Never Stop Playing".

Posted by First World Podcast at 8:56 AM