Retro gaming: A changing hobby from gaming to repair

When I first picked up that grey piece of plastic, with red buttons on the right, and a black cross on the left, I knew that I never wanted to put that rectangle down.  Luckily for us gamers, we didn't have to.  Nintendo Entertainment System's were made out of a very rare, very resilient material called "Nintindite"...  Well, not really, but that grey box that was purchased when I was a child still works.  My NES has been dropped, kicked, hit, left in a dusty machine shop office, moved, neglected, and forgotten about, and it still works.  It has problems, like anything that has been around for the better part of three decades, it needs a bit of love.  The other thing that is lucky for us retro gamers is that the internet is a wonderful place for resources on maintenance and repair on our old consoles.  Do you remember the days when there were a plethora of options on the repair of your home appliances and electronics?  I do, my mom kept a 13" color TV alive for years by the occasional tune up to keep those tubes glowing.  In recent years, most places won't even touch your consumer electronics for the simple reason, designed obsolescence.  It is harder and more expensive to fix than it is to buy a new one.


I have been recently trying to rebuild my retro gaming collection.  That means long talks on the phone with my mother and brother on "who gets what" and "who's is who's", and the treacherous shipping in between the West Coast and the Midwest.  Ebay works for that obscure title, and second hand stores for others.  Dan got a job as manager for a local thrift store, so he keeps his eyes open for things I might like.  With anything that is coming from a source that isn't the first owner, or a specialist who handles only retro games and systems, sometimes you encounter broken or damaged pieces.  I realized, very quickly, that if I am going to try to grow my collection, I am going to have to learn how to repair my collection.

Recently, I acquired a tested, and working Sega Game Gear, complete with eight games, all in box.  My history with the Game Gear is storied to say the least.  I NEEDED a Game Gear in the early 90's.  That color screen, Sega master system quality graphics, I knew that this was the way of the future.  After I ripped out a couple of teeth, sold my Game Boy, and saved my money, the Game Gear was mine.  The only problem was that the system had the worst battery life, making it the worst choice for a portable system, and I would eventually sell my Game Gear collection to get my Game Boy back again.  All of this was flashing through my mind as I was swiping my debit card, and all I wanted was to have a better experience with it then I did when I was young.  I got it home and inspected the system.  The overly large, greyish black plastic body was covered in tiny scratches and kid grease, this system was a child's best friend for many years.  I pressed the buttons and had flashbacks more powerful than a hippy from the 60's, I needed to play it.  Turns out, in my modern household, we don't have a need for many batteries anymore, so I didn't have the six AA batteries to power the system.  Amazon.com had a generic power supply, so all I had to do was wait.  Power supply in hand, I plugged the system in and powered the system up for the first time. To my instant shock, there was no sound, not through the external speakers or the headphone jack.  All I wanted to hear was the iconic bit sampled "Say-Gah", but there was only the awkward silence of a nerd getting ready to rage quit.  The next thing I noticed was that the screen looked like my Game Gear had been drinking all night, it was blurry and full of tracers.  Calmly, I set the system down, and made sure that the power supply I had was the right voltage, and everything checked out.  I picked up the phone and called Dan to see if he noticed anything wrong with it, all he could say is that it worked like a champ for him.  I felt like I was stuck, and reliving the nightmare of my childhood, the curse of the Sega Game Gear.

After letting myself cool off a bit, I curled up around my smartphone, and scoured the interwebs to find out the answer to my problem.  Instead of the search being a long, drawn out process, my first Google search gave me all the answers, and more.  This is the great thing about the internet, communities that are formed around the things we love.  Turns out, the Game Gear has a series of capacitors that tend to go bad after awhile, and I had read other people had problems once they used a power supply instead of batteries.  So, the short answer is that I need to replace some caps, no biggie, the question is, which caps are bad?  And, where do I buy the caps I need?  For some reason all my phone was pulling up was UK sites, and that wasn't really helping me find a price for the capacitors, so I figured I would try Amazon.  To my surprise, a seller called Classic Retro Games had a Sega Game Gear Capacitor Replacement Kit. $16 later, I had the parts I needed, now, all I needed to find out was which ones to replace.  YouTube is always the first place I look when I am searching for tutorials, because I am a very visual learner.  I was fortunate to find a guy named Stig,who had two comprehensive video guides on how to replace the caps on the main board and the sound board, so thank you very much Stig.  Also to my surprise, Stig said that most of the time only two caps (per board) were the culprits of the lack of sound and blurry screen.  My search was complete, I had the answers, the parts, and the directions on how to fix the problems

With the links above, you have all the information that I had before I started the repair.  I am not trained in electronic repair, nor am I a proficient solderer.  All I have that separates me from other gamers, is that I have no fear of opening up anything and figuring out how it works.  If you are using this as a guide, stop it, I will not be held responsible for you ruining your Game Gear.  But, if you are cut from the same cloth that I am, and you have the same lack of fear that I do (or if you just want to see how my repair went), then read on.

I highly recommend that you buy yourself a set of Helping Hands, it will really help you on the sound board fix.  If you are not familiar with them, it is the device that has the alligator clip hands, and the magnifying glass, worth their weight in gold.  If you are planing on doing much retro console/game repair, I also highly recommend that you buy a Video Game Tool Kit, most video games and game consoles use security drivers to keep people for reverse engineering them, and the Game Gear has one security screw, smack dab in the middle of the back.  Otherwise, all you will need is a soft spot to work on, a variable wattage soldering iron, solder, wire clippers, and a small set of needle nose pliers.

After you remove all of the screws, the Game Gear opens up surprisingly easily, but then I was underwhelmed by how little there is on the inside of it.  I stared at it for awhile; 1) To determine which version of the console I had.  2) To figure out what the hell I was looking at?!?!?!?

I had never seen capacitors encased in little plastic boxes. To the untrained eye, they looked like tiny microchips, but realistically almost the only thing that can be worked on, on the Game Gear board, is capacitors.  In a move to reduce the amount of visual clutter, I removed the entire main board from the shell. 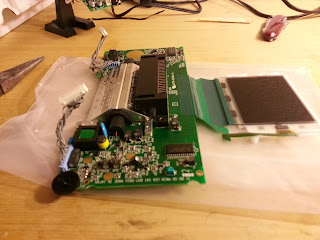 In Stig's video, he shows you where you should start replacing the caps.  I told myself that I would see how hard it would be, and how long it would take me to replace the two caps on the main board.  The problem with the caps on the main board, besides the fact that there are a shit load of them, is that there are tons of little silicone things all around them. In Stig's video, it looks like there is space around the caps, and not many things too close to the soldering points.  There is literally an eight of an inch or less in between components, and you are dealing with a soldering iron that is capable of melting metal, talk about nerve wracking.  30 minutes later, I had the first two capacitors changed, time to move to the sound board.

The sound amplifier circuit is a mess.  I thought that components were close on the main board, but I never have had to cram so many things into such a small foot print.  The main difference on this board is that the capacitors are flat mounted to the PCB.  Let me paint you a picture to help you understand how hard this was to work on:  Imagine that the capacitor is a tree, and the legs of the caps are the roots.  The capacitors on the main board are mounted so the "roots" are exposed, making it easier solder, and desolder.  The caps on the sound amplifier are mounted at the the base of the "tree", giving you no room to desolder the points, it is almost like you have to dig through the PCB to get to the "roots".  DON'T DIG INTO THE BOARD!!! I was using that as an analogy.  I finally was able to remove the capacitors and get the new ones soldered into place and that took about 45 minutes. My neck, and back were sore from having to stay hunkered over for so long.  Now it was time to put all of my soldering skills to the test and reassemble my Game Gear.  To keep myself from freaking out when I screwed everything back together and testing it, I nestled the pieces together and plugged the power supply in.

SEGA!!!
Everything worked, and on my first try to boot!  I will say that, unfortunately, the capacitors on my main board will not nestle back inside the case without causing damage to the caps or the case or both, so I will have to cut out a hole in the left side battery compartment to give my home brew fix some space to work, which means that I will not be able to take this with me as my portable game system, but I couldn't afford to keep the damn thing in batteries even if I wanted to.  On Heath's patented difficulty scale, I would give this fix a 2 out of 2 balls, mainly for the fact that there is not much room to work, and all of the components are very sensitive to the heat of an soldering iron.  Pretty good for my first hardcore electronics repair, if I do say so myself, but I am not looking forward to replacing the other capacitors on the board as they will inevitably fail.
Posted by First World Podcast at 10:09 PM